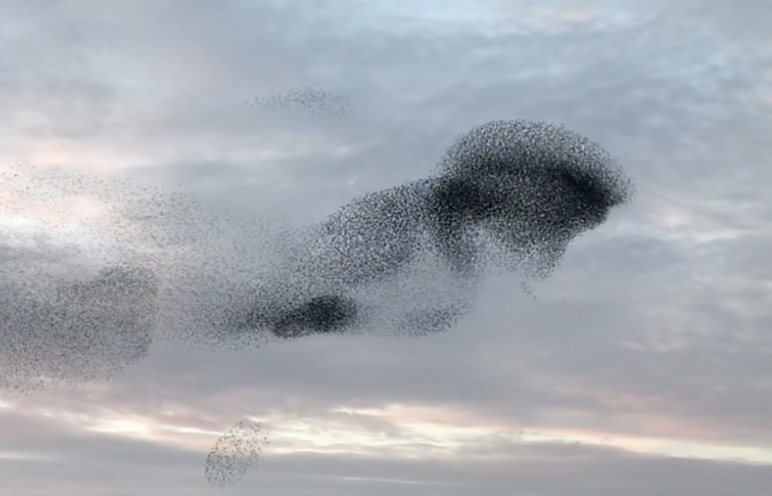 The rain has stopped and with a crisp cold day and no guests, I went up to Ham Wall RSPB reserve up the road to watch the starlings come in to roost. It’s a huge joy on any day, even if it’s just to watch the millions of birds fly in and settle, chattering noisily as they do.  But usually there’ll be a display of aerial joy of one sort or another before they settle down: it’s one of the biggest sites of starlings in the UK. No-one knows how or why they do it, but tonight was a spectacular display. Pure magic.

A lone peregrine falcon came piling in in an attempt to get supper, but whether it’s confused by the mad looping and swooping of so many edibles at one time, or just that starlings can outmanoeuvre a peregrine where they’re in a swirl like that, it came away without success. Not sure if it increased the drama of the swirl or brought it to an early end, or how much word passed through the flock of the danger. We know so little.

It’s a beautiful spot, on the edge of Glastonbury on the Somerset Levels. I quite often yearn for a day to just spend there. With a hot water bottle and a flask.

Here’s the moving version – I filmed part of it on the phone, but then got frustrated watching through a screen and selfishly just watched the rest without technology.

4 thoughts on “Starling Murmurations in Somerset”

A B&B in South Somerset. Slightly shabby as all the money was spent on beds. Eggs exceptionally good as hens maraud their way through veg patch regularly.

This morning I sat down to write a long long list of things that needed doing, and then I spent 20 minutes finding a photo for a friend’s contact image #efficiency #priorities #sodit

I do love a dishwasher #B&B

When Brazilian footballer Pelé popularised the phrase The Beautiful Game, he was probably talking about Squirrel Ball.

Jam first then cream. Unfollow if this offends you