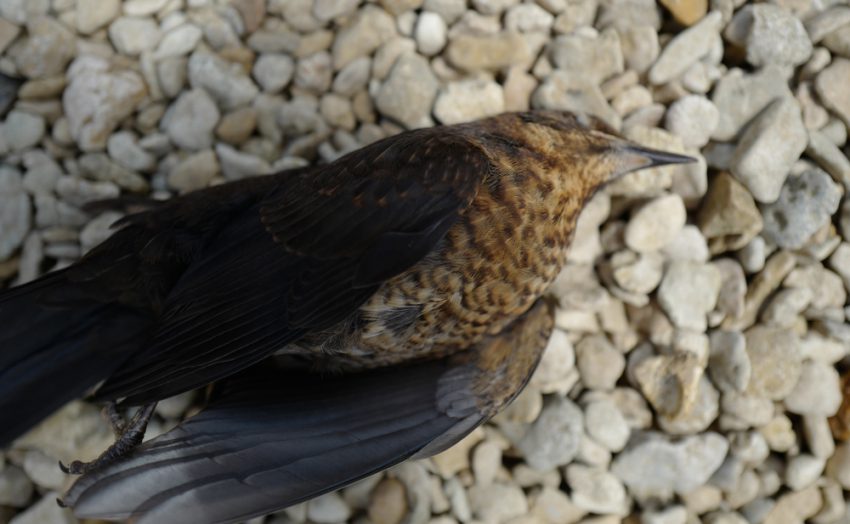 This is the time of year when the new fledglings are off and independent but constantly getting caught out by inexperience. I have had three young robins trapped in the house in the last week (or the same stupid one?), and another flew into the van and couldn’t find her way out. Lots are finding their way into the polytunnel, and there’s much panicky flapping and beating against the wall when I walk in, but at least there they can find their way out.

I have learned a good trick now for catching trapped and panicking birds, which is to hold a big cloth in front of your face as you try and corner them to catch them – a tablecloth is good: something light and cotton. Though I’ve had to make do with a thick woollen blanket, which is more challenging both for bird and rescuer, as it’s harder to see where you’re going, and rather heavy on the bird, as the trick is to cover your face and body as you get closer and the birds stop flapping and panicking. They just watch the approach of the curtain with bewilderment. Once close you can use the cloth to drape over them and hold them while you pick them up and then carry them outside. Once you have them in your hand you can dispense with the cloth or it rather gets in the way. As long as they can’t see your face they stop that awful banging against the windows trying to get out.

This young bird I found outside the garden room. I imagine it flew straight into the window, possibly after a fight, which there are a lot of at the moment. Sometimes they’re stunned but all right, but this one didn’t make it. I’m not sure what the casualty rate is from windows. Probably nothing compared to cats, but still, another human-made hazard. Poor buggers.

Standing in the garden listening to birds belting out song and thinking we share the same inexpressible happiness that spring is here. And found this article inspiring in how to help https://www.theguardian.com/lifeandstyle/2011/mar/27/gardens-spring-blossom-dan-pearson

• Ultimate comfort on a high performance memory foam mattress that actually isn’t foam at all and really does remember who you are.

• Gently warms you to your ideal body temperature.

• The first dog bed to provide lifelong friendship and companionship.

The Earl of Southampton, painted in 1603, with his lawyer.